Some of the books that took home the year’s biggest literary prizes.

The Rabbit Hutch by Tess Gunty

A bold and prismatic debut novel, The Rabbit Hutch by Tess Gunty is about the daily lives of the residents in a depressed Midwestern complex. Told over the course of one hot summer week and through a kaleidoscope of voices, The Rabbit Hutch is beautiful, biting, darkly comic, and provocative. This novel is a snapshot of America and the many ways we struggle with loneliness, yearning, and the painful pursuit of freedom. -judges citation

The Birdwatcher by Gail Jones

The Birdcatcher is a ferocious defense of a woman’s right to make art— a precise, elegant, and unsentimental account of the subtle and unsubtle barriers thrown in her way. Gayl Jones suffers no fools, nor children, nor demonstratively supportive husbands, nor art scene sycophants. She wields language like a box cutter, some tiny surprise in every line. Staggeringly intelligent, the novel demands a reader’s fully embodied attention. This is one mean baby of a book. -judges citation

All This Could Be Different by Sarah Thankam Mathews

All This Could Be Different by Sarah Thankam Mathews is a powerful debut novel about friendship, queer love, and succeeding as a young adult in the working world. Mathews skillfully dramatizes a story of a young immigrant in difficult and uncertain times in prose elegantly rendered with precision and detail. All This Could Be Different is a funny, propulsive, and emotionally-charged gem of a book. -judges citation

The Town of Babylon by Alejandro Varela

Intimate and expansive, universal and local, funny and heartbreaking, Alejandro Varela’s The Town of Babylon delivers a rich, energetic narrative of life and death in an American suburb. A gay Latinx man returns to his hometown to care for ailing parents and finds himself forced to confront the histories of love, loss, struggle, and sacrifice that, for better and worse, have formed him. With this urgent, vivid novel, Varela has given us a modern classic and an indelible portrait of our times. -judges citation

Meghan O’Rourke has written a riveting account of chronic illness and an incisive critique of a medical system that fails to see patients holistically and, therefore, humanely. The product of years of rigorous investigation and reflection, this lucid and lyrically precise book has been called timely—as drastically increasing numbers of people now suffer with “invisible” illnesses—and yet The Invisible Kingdom is testament that such a work has long been needed. -judges citation

South to America: A Journey Below the Mason-Dixon to Understand the Soul of a Nation by Imani Perry

Imani Perry guides us gently below the Mason-Dixon line, drawn legally and geographically, and into the American South’s cities, towns, forests, mountains, and coast lines to understand the region’s history. Perry breathes fresh air into examinations of long-held policies and current cultural practices nuanced by place and time. South to America is elegantly personal and archival, predictive and bold, sweet and soulful, and, most of all, true. -judges citation

The Man Who Could Move Clouds: A Memoir by Ingrid Rojas Contreras

In fierce and vivid prose, Ingrid Rojas Contreras explores the legacy of divination and traditional healing that both unites and divides her Colombian family. The result is a spellbinding mixture of memoir and history, filled with insights into culture and colonialism that raise fundamental questions about what is magical, what is real, and who gets to decide. The Man Who Moved Clouds is gorgeous, gripping, and wise; a book to be savored. -judges citation

Even through the roar and effervescence of the 1920s, everyone in New York has heard of Benjamin and Helen Rask. He is a legendary Wall Street tycoon; she is the daughter of eccentric aristocrats. Together, they have risen to the very top of a world of seemingly endless wealth—all as a decade of excess and speculation draws to an end. But at what cost have they acquired their immense fortune? – from the publisher

The Books of Jacob by Olga Tokarczuk

Olga Tokarczuk has won the Nobel Prize in Literature and the Man Book International Prize, among many other honors. In the mid-eighteenth century, as new ideas—and a new unrest—begin to sweep the Continent, a young Jew of mysterious origins arrives in a village in Poland. Before long, he has changed not only his name but his persona; visited by what seem to be ecstatic experiences, Jacob Frank casts a charismatic spell that attracts an increasingly fervent following. In the decade to come, Frank will traverse the Hapsburg and Ottoman empires with throngs of disciples in his thrall as he reinvents himself again and again, converts to Islam and then Catholicism, is pilloried as a heretic and revered as the Messiah, and wreaks havoc on the conventional order, Jewish and Christian alike, with scandalous rumors of his sect’s secret rituals and the spread of his increasingly iconoclastic beliefs. The story of Frank—a real historical figure around whom mystery and controversy swirl to this day—is the perfect canvas for the genius and unparalleled reach of Olga Tokarczuk. –from the publisher 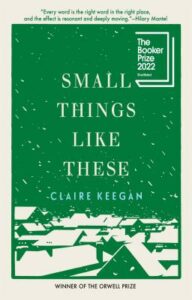 Claire Keegan’s tender tale of hope and quiet heroism is both a celebration of compassion and a stern rebuke of the sins committed in the name of religion. It is 1985, in an Irish town. During the weeks leading up to Christmas, Bill Furlong, a coal and timber merchant, faces his busiest season. As he does the rounds, he feels the past rising up to meet him – and encounters the complicit silences of a small community. –-judges citation 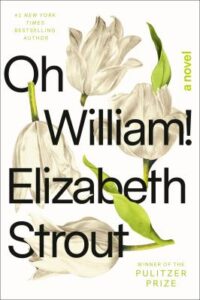 Bestselling author Elizabeth Strout returns to her beloved heroine Lucy Barton in a luminous novel about love, loss, and the family secrets that can erupt and bewilder us at any time. -from the publisher 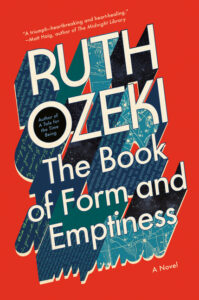 The Book of Form and Emptiness by Ruth Ozeki

Blending unforgettable characters with everything from jazz to climate change to our attachment to material possessions, this is classic Ruth Ozeki – bold, humane and heartbreaking. –from the publisher 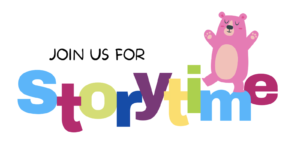